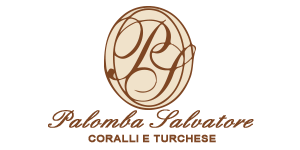 In the gemological panorama, the precious stone that boasts the oldest History and the greatest number of legends and myths is surely the Turquoise.

The name is not given by color, but rather the opposite is true: the color was defined on the basis of the name of the gem.

When in the 13th century this stone was introduced into France, for the first time, by a Venetian merchant, it was called “pierre turquois”, or “Turkish stone” to suggest its origin.

This name, since it synthesized very well the exotic origins of the gem, was soon universally adopted and replaced the previous names which were: “ferozah” (= victorious) for the Persians, “calläis” for the Greeks (= beautiful stone ) from the ancient Greek “kalláïnos”, and finally “callaina” for the Romans. 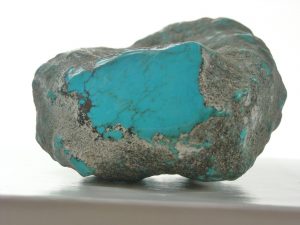 The many varieties and the innumerable chromatic nuances favored one of the greatest beliefs of the Antiquity, which induced to think that the color changed according to the state of health of who wore it, coming to become completely white in case of death of the owner, or black after a possible betrayal in love.

In fact, turquoise can actually change its color with time, but it becomes darker and dull due to the internal oxidation of copper.

Its color is the now proverbial blue-green, but the shade considered best in Gemmology is the one that despite the presence of the green influence approaches as much as possible the blue sky.

Varieties that tend to be green are considered a little less valuable.

In some cases it shows artistic veins that are created by the presence of manganese oxide or black limonite.

The History of Turquoise, as already mentioned, deeply sinks its roots in Antiquity.

It was considered a remedy against tumors, intestinal diseases, epilepsy and ulcers.

It was considered able to appease and quell the quarrels, but a magical peculiarity credited to this precious stone, advised against wearing it when it was prey to anger, as by winning the resistance it could fall into any possible excess.

In the second millennium BC, the Mayans considered the Turquoise more valuable than gold.

In Egypt the goddess Hathor was known as Queen of the Turquoise, and many scholars believe that this is why the sacred scarabs dedicated to the god Ra were represented with this gem.

Aristotle also suffered the charm of this beautiful gem, and came to write that it protects from the scorpion’s bite and even from death.

The Romans appreciated the Turquoise so much to associate it with Venus, the goddess of Love, and wore it precisely on the Friday sacred day of the goddess.

In more recent times the use of the Turquoise was considered by the Navajo Indians, who attributed it the ability to overcome fear and to preserve from the bite of the snakes, as convinced that it was the container of the spirits of all animals.

The Indians of America, in fact, often wore Turquoise beaded necklaces, in the conviction of propitiating the hunt and subscribe the god of rain and winds, which they did by throwing one of these gems into the water.

Subsequently the “pierre turquois” was associated in Tibet to the sense of the divine, while in Russia it was considered able to protect the knights in battle.

The Turquoise’s bond with Love has always been very close, so much so that in Russia and Germany the wedding ring must have set this gem, because it was believed to have the power to make the conjugal union firm.

Today the Turquoise is used in jewels of great artistic value and in Jewelry, but it is also very appreciated by young people who like to wear it on silver jewelry.

It is not a delicate stone, but obviously some attention must be paid to it, so it is not advisable to use ultra-sounds for its cleaning.

The Turquoise of great value still comes from Iran, but now the quantities are very small.

Many of the Turquoise on the market come from New Mexico, Arizona, California and Nevada.

Pay attention to treatments. Large quantities of Turquoise are subjected to procedures aimed at increasing their color and hardness, and therefore artificially their value.